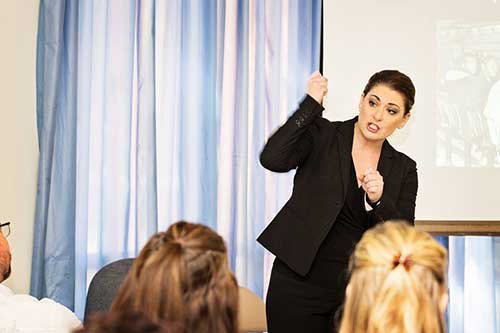 Amber D. Farrelly received her undergraduate degree from the University of Oklahoma and her Juris Doctorate degree from Arizona State University Sandra Day O’Connor College of Law with the highest distinction for her pro bono work. Amber began her legal career clerking for both criminal defense teams in the Yogurt Shop Murders shortly after their reversals by the Court of Criminal Appeals in 2007, until both cases were dismissed in 2009.

Amber began practicing as a criminal defense attorney in 2009. She joined The Fowler Law Firm in 2011, specializing in criminal defense. In 2012, she left and opened Baird Farrelly Criminal Defense, PLLC with Charlie Baird. In 2017 Amber set out on her own forming Amber Farrelly Law. Amber is licensed in and practices throughout the state of Texas. She has worked with the Innocence Project of Texas as well as the Texas Civil Rights Project.

Amber specializes in Deaf clientele and is a court-certified interpreter in American Sign Language (ASL).

Amber is a criminal defense attorney, practicing throughout the state of Texas, qualified in all levels of misdemeanors and felonies. She has tried numerous felony and misdemeanor jury trials.

Are you in need of an expert criminal defense attorney with a specialization in ASL? Contact Amber today.